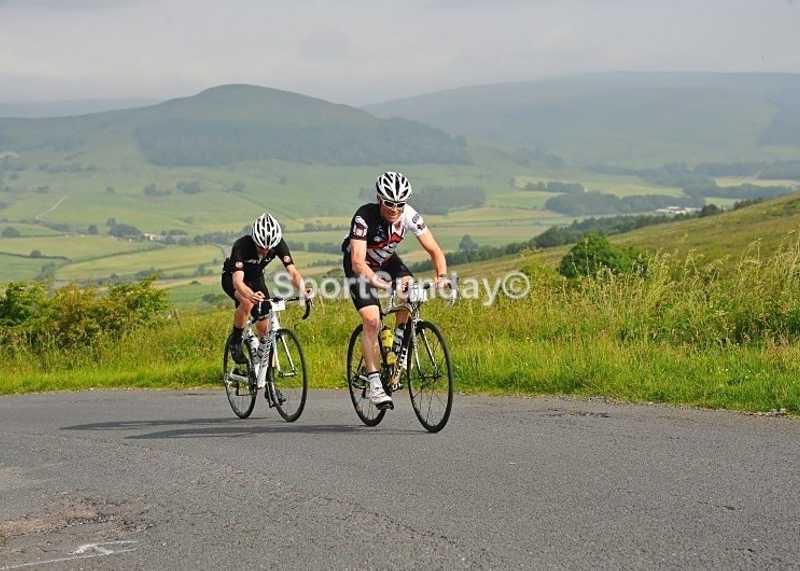 The Bowland Badass is a torturous 167-mile cloverleaf-shaped route that begins and ends in Garstang, dipping and diving up and down an almost seemingly endless succession of hills, all within the Forest of Bowland Area of Outstanding Natural Beauty. It has over 18,500 feet (over 5500 metres) of ascent.

Special thanks to Professor Badass, for creating such a stupid route.

The Bowland Badass was my first exposure to Ultra distance endurance challenges. Here’s a report from my archives back in 2013. I had been cycling ~a year at the time.

This weekend I cycled 243 miles and entered two sportives. The Bowland Badassand the Wiggle Cheshire Cat. On Sunday evening I could barely stand for tired legs or sit down for saddle sores.

My weekend started at 04:50 on Saturday morning. I forced down some breakfast and set off to Badass HQ, Garstang at around 05:30. I signed in and got ready for the toughest day I’ve ever had on the bike.

I went out with the ‘fast’ group at 06:40. The pace for the first few hours was very quick but at that point I didn’t feel like I was pushing myself too hard. The group I was in stayed together for a while but after the first couple of climbs was thinned down and by the time we had gone over Jubilee Tower, The Trough and a few more climbs that were new to me just three of us remained at the front.

The first feed stop was at the 62 mile mark. By that time we had already climbed over 6000ft and the average speed was almost 19mph (18.8 to be exact). We arrived there something like 30/45 minutes quicker than the ‘winner’ the previous year! 3 hours down, 7 to go!

The stop was only brief, I had time to grab some cake and top up my water and we were on our way again. We were joined by one other at this point, Mr Dave Powell.

The pace stayed extremely high and I must have been pushing harder than I thought. I still felt okay but it was between feed station 1 and 2 that I first began to fade slightly. As we climbed Lythe fell I lost touch with Dave and John, two of guys I had been riding with but with a bit of a dig managed to stay ahead of the last guy in our group… For now.

By the top of the climb I had blown. I didn’t know it then but I think this was the turning point in my ride. If I had just backed off slightly maybe I would’ve recovered and had way more in the tank for the rest. Who knows?

I held back and Seb caught up to me and we rode together for a good while, but I started to cramp badly. Eventually he took off down the road after edging away on Waddington Fell (one of my favourite local climbs). I just didn’t have any legs left. My cramp was awful but I had no choice but to ride through with pain shooting up the inside of both thighs. This was something that would last the remaining 80 or so miles. Ouch.

After just over 6 hours and now more than 11000ft of climbing I arrived at the second feed station. Here I was greeted by a very welcome Tuna sandwich and some fresh water. I also grabbed more cake and necked some fizzy cola sweets. I tried not to hang around for too long and set off again. By now I was knackered. This was already more than any ride I’ve ever done before and I still had 4 hours to go…

At around the 110/120 mile mark I was at my lowest. Exhausted and full of cramp I was still a long way from home. Nothing I could do would bring my legs back and every incline turned into a torturous grind. Where usually I would welcome a climb and spin my way up with relative ease. This was the point Professor Badass decided to stick the Nick O’ Pendle (11% grade average) & Whally Nab (maxes out at around 25%) climbs. Both ferociously steep I really had to dig here.

There was little respite as Birdy Brow and Jeffrey hill both stood in the way of me and the last feed stop. I had pretty much slowed to a crawl by now but I was still 4th on the road and was determined to stick it out. I was looking behind every few minutes expecting to see a crowd of riders flying my way. Luckily it didn’t happen.

Feed station three. The final chance to grab some food for the last 20something miles. It doesn’t sound like much but there was still a lot of climbing to be done! By now I was 140 miles in and had climbed more than 16500ft. I was at 8 hours 49 minutes. Still 20 minutes faster than the winner last year. There’s hope yet…

Just as I was preparing to set out long-time Strava buddy the as yet elusive mr Richard Shilling came flying into the feed station on the ride of his life. Check out his insane time. He completely blew my ride out of the water so major kudos to him. I tried to keep with him but only lasted a few miles until the first real climb at chipping where he rode away from me near the top. Ah well!

From there it was only Beacon Fell, Oakenclough, Harrisend Fell and Long Lane that stood between me and home.

Then I punctured. With around 8 miles left.

I was too tired to be annoyed. I flipped my bike upside down and repaired it at an easy pace. I should’ve rushed really as I lost a lot of time here. However, I ate one last energy gel, got back on my bike and set off, propelled by a second wind.

After the sluggish pace of the last 50 miles I was now flying and made it back to HQ after 10:55 minutes total. My ride time was 10:23 minutes. I wanted to finish in under 11 hours, so whichever way you look at it I achieved my goal! Success.

The Badass completely killed me, but on Sunday I was signed up to ride the Wiggle Cheshire Cat. A Kilotogo event. I had done the Tour of the Peaks last year by the same company and it was a great event. Well organised with a fantastic route. The Cat however… Well, was it just because of how shit I felt after the previous day? Who knows but I don’t really have much to say about it.

The route wasn’t great in my opinion. There was a lot of main road. My arse was a mess. It looked like a lobster with acne. I had saddles sores growing out of saddle sores and I just wanted to go home. It was just 75 miles of misery really.

I also found it unbearably cheesy. We were asked to do a “wiggle pledge” before the start which ran through utter bollocks like “don’t drop litter and don’t do a wee in someones garden”, common sense stuff. Instead they should’ve run through basic road cycling ettiquette like; don’t half wheel and point out where you see potholes, etc…

Worse though was the woman they gave a microphone and PA system to at the finish line. Shouting out your name as you crossed the line “YOU ROCKSTAR, YOU!”. Shutup. I don’t want to hear it.

The food stops compared to the Badass (which had pizza, home made cakes, sandwiches, sausage rolls, sweets and more) were shite with just a mini-roll and some soreen. The cat was £30 and the Badass £10. Looking at the two, which one was value for money?

I don’t think I’ll be doing the Cat again. I don’t know if I’ll be able to do the Badass again!